It is adorned with authentic embroidered replica patches in recognition of the record of one of its fighter pilots and with the famous "Tonkin Gulf Yacht Club" patch in recognition of war service off the coast of North Vietnam, making it original and attractive.

Since this item is made to order in the USA, delivery time is 2 to 4 weeks. In case it takes longer, we will inform you personally.

The "G-1" leather jacket, with its particular "V" design to avoid snagging on the cockpit joysticks, is the most widely used jacket in the history of the US Navy, making it prestigious in itself and desired by aviation enthusiasts. 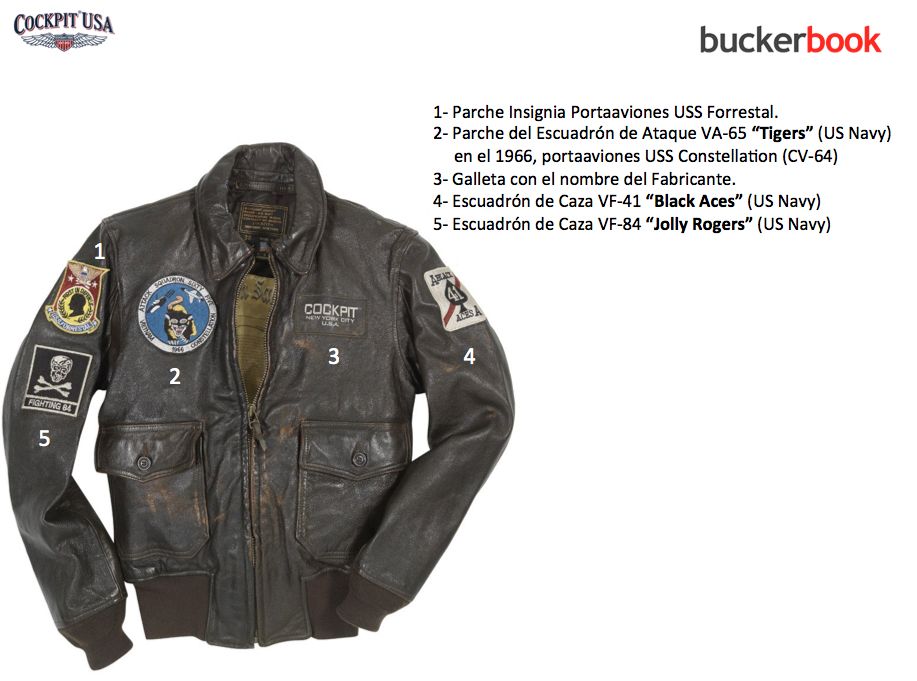 In 1947, the official flight jacket was renamed G-1, and this design has been maintained to the present day. The era of massive use of jet fighter aircraft, with the beginning of the Vietnam War, makes it unnecessary to use these jackets in flight, so they remain on aircraft carriers and air bases.

This jacket has its own history, represented through the emblems (patches) of the Units to which the pilot who used it, during his service in the Vietnam War on board the aircraft carrier (CVA-59) USS Forrestal, pays tribute to the prestige of the wearer and that we describe below: 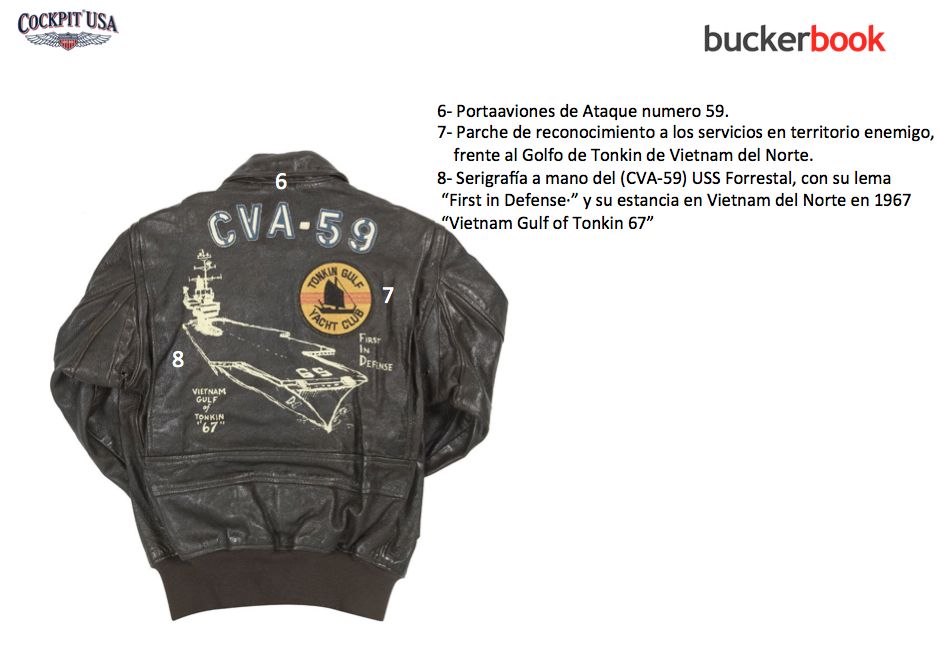 Cockpit USA
Z21V024
€520.66
Aviator jacket in suede A-2, iconic garment that equipped the pilots and air crew of the US Army Air Force (US Army) during World War II. Its soft to the touch, velvety and elegant leather makes it a piece of clothing and a distinction for aviation enthusiasts in general and professionals in particular. Since this item is made to order in the USA,...

Cockpit USA
Z2567MM
€512.40
A-2 pilot jacket, used by the United States Air Force (USAF), made of leather. Since this item is made to order in the USA, delivery time is 2 to 4 weeks. In case it takes longer, we will inform you personally.

Cockpit USA
Z2108
€438.02
This pilot's jacket is made with real goatskin like the authentic aviator's jackets of the U.S. Navy. Its synthetic mouton leather collar, can be worn with the classic style or high as it has loops and buttons for dual use.The jacket has a regular fit, with a metal central zipper. It has two front pockets with flap and button. The waist and cuffs of this...

Cockpit USA
Z21J003
€545.45
Aviator jacket Cockpit,USA in A-2 leather, iconic garment that equipped the pilots and air crew of the US Army Air Force during World War II. This special edition was designed in the 1980s in memory of the African-American airmen who studied at the Tuskegee Institute in Alabama and distinguished themselves in World War II with the nickname of the Tuskegee...

Cockpit USA
Z21E013
€495.87
This Cockpit, USA model G-1 pilot's jacket was designed to U.S. Navy military specifications, made legendary by the movie "Top Gun" (1986). They are still being delivered to U.S. Navy and Coast Guard personnel today. Since this item is made to order in the USA, delivery time is 2 to 4 weeks. In case it takes longer, we will inform you personally.

Alpha Industries
143104
€163.56 €181.74
Flight jacket for pilot type Slim fit, perfect as a windbreaker or as a functional flight jacket.Its outer flight cover is made of nylon, waterproof, of great durability and resistance. It provides efficient protection against the elements. Its inner lining is padded, dark colored and incorporates two pockets inside. The collar is made of black sheep. The...

Cockpit USA
Z2107G
€388.43
The Aviator Leather Jacket, Cockpit USA A-2 (Reissue), is the result of modifications made in 1987 to the iconic garment that equipped the pilots and aircrew of the US Army Air Force during World War II. Since this item is made to order in the USA, delivery time is 2 to 4 weeks. In case it takes longer, we will inform you personally.

Cockpit USA
Z21T008
€1,239.67
A-2 pilot jacket, used by the United States Air Force (USAF), made in leather and with embroidered patches. It is an exact replica of the one used by the pilot of the World War II Consolidated B-24 Liberator "Bottoms Up" bomber. Commemorating the 40th Anniversary of the "Bottoms Up" Pin Up, a hand-painted piece of artwork on the back, in reference to the...

TAG-VUELING
€16.45
Equip your suitcase with the TAG Aernoaútico of Vueling, Spanish airline, based in Barcelona, owned by IAG. It is the largest airline within the Spanish territory in number of destinations and fleet size. Made with high-quality materials. The best way to identify your luggage!

122421
€37.19
CWU Pilot Jacket for children, fits perfectly to the smallest of the house and avoid getting cold and at the same time feel a little more pilots wearing it. The jacket has 7 patches. Made with 100% Nylon
Product available for orders
Home