A-2 pilot jacket, used by the United States Air Force (USAF), made in leather and with embroidered patches.

It is an exact replica of the one used by the pilot of the World War II Consolidated B-24 Liberator "Bottoms Up" bomber.

Commemorating the 40th Anniversary of the "Bottoms Up" Pin Up, a hand-painted piece of artwork on the back, in reference to the one worn on the nose of that aircraft.

Since this item is made to order in the USA, delivery time is 2-4 weeks. In case it takes longer, we will inform you personally.

The "A-2" leather jacket, with its particular "V" design to avoid snagging with the cockpit control levers, is used in the history of the USAF, making it prestigious in itself and desired by aviation enthusiasts.

It is an exact replica of the one used by the pilot of the World War II Consolidated B-24 Liberator "Bottoms Up" bomber.

Commemorating the 40th Anniversary of the Pin Up "Bottoms Up", a work of art hand painted on the back, in reference to the one worn on the nose of that plane. 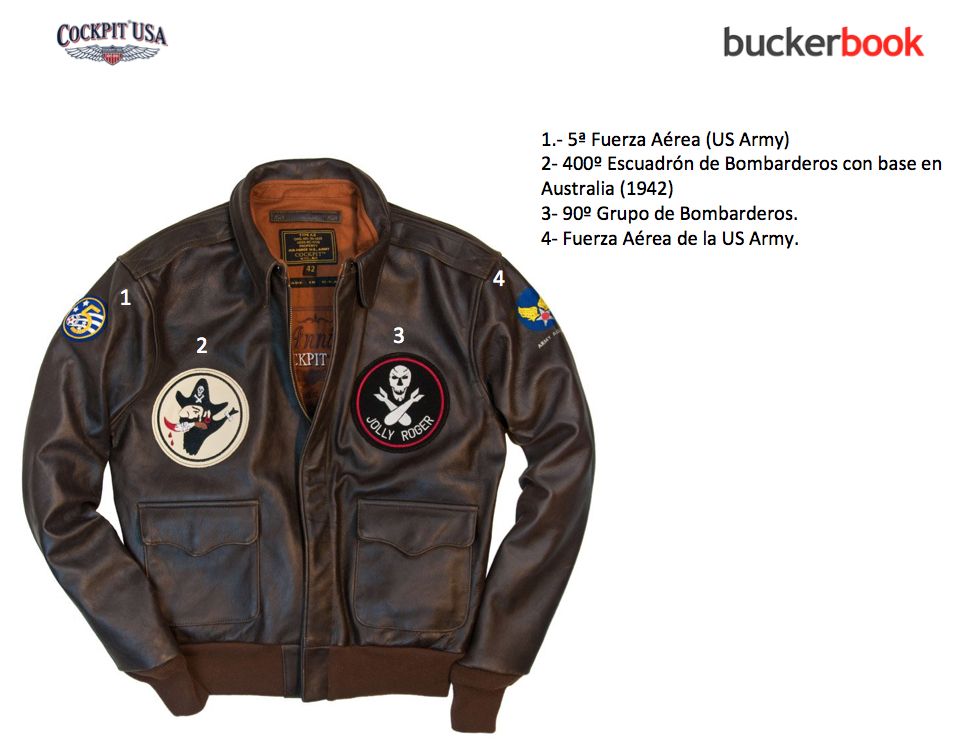 From the first applications of aviation (1910-1920), the flight uniformity of pilots in general was focused on combating the cold and the impact of the air, for this purpose adopted the clothing used by motorcyclists, examples of this are the use of airtight glasses, scarves, scarves, gloves, hats and leather jackets.

In 1938 leather jackets were born with a specific design for aviators and were used during the Second World War, the mythical A-2.

This jacket has its own history, represented through the emblems (patches) of the Units to which the pilot who used it pays tribute and the famous drawing on the back, for the prestige of the wearer, which we describe below: 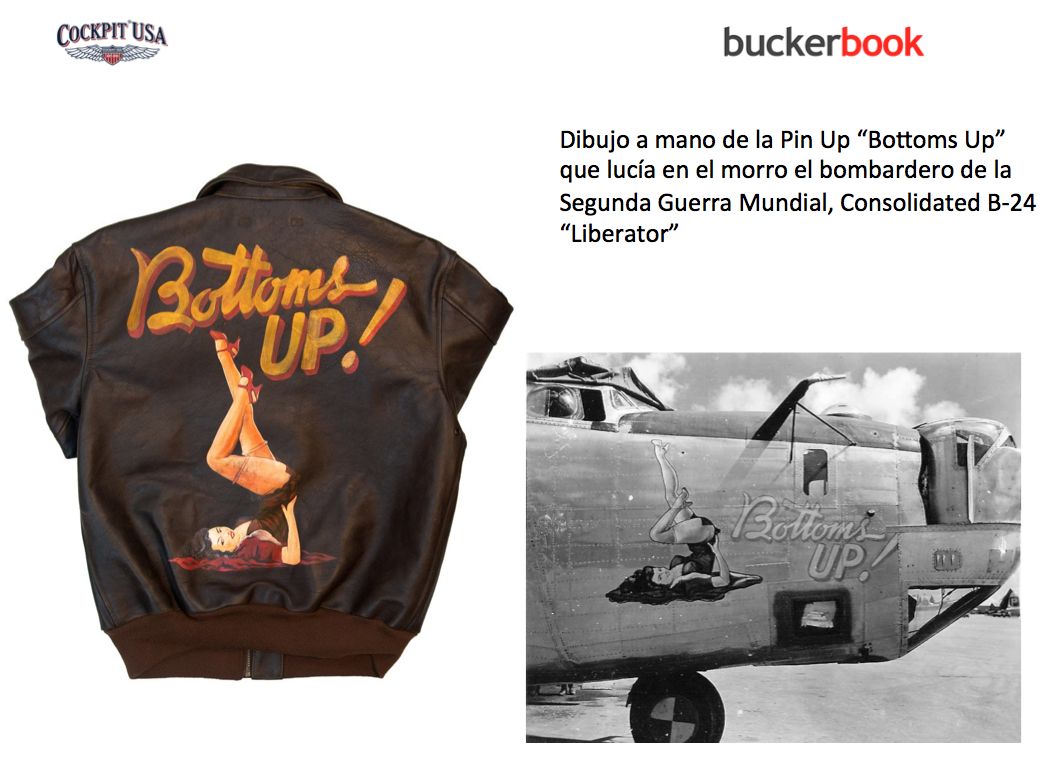 Cockpit USA
Z21C0071
€520.66
Classic fighter pilot jacket, model G-1 design 1940's, used by the United States Navy. During World War II, the appearance of the aircrew's flight jackets reflected the age and the number of war missions performed, so their aging was a mark of prestige and a symbol of efficiency. This vintage jacket reflects the long-awaited record to be achieved by all...

Cockpit USA
Z21W009
€561.98
A-2 Leather Pilot's Jacket, iconic garment that equipped the pilots and air crew of the US Army Air Force (US Army) during World War II. This is a special and unique edition, commemorative of the 40th Anniversary that is manufactured under the US Army specifications of the time. A distinction for aviation enthusiasts in general and professionals in...

Cockpit USA
Z2108M
€487.60
This G-1 pilot's jacket was designed specifically with U.S. Navy fighter pilots in mind, made legendary by the movie "Top Gun" (1986). A distinction, a lifetime investment and a magnificent legacy.  If your size is not available in our store, you can place your order. Delivery time is 2 to 4 weeks.

Cockpit USA
Z2567MM
€512.40
A-2 pilot jacket, used by the United States Air Force (USAF), made of leather. Since this item is made to order in the USA, delivery time is 2 to 4 weeks. In case it takes longer, we will inform you personally.

Cockpit USA
Z21P007
€495.87
Hunter M-422A (G-1) represents antiquity through aging by number of landings (200) on aircraft carriers by pilots of Corsair, Helicat or Dauntless aircraft or in its namesake, the Grumman TBF "Avenger" torpedo boat. Flying, during battles in the Pacific, in salt spray, walking the flight deck while maneuvering against the wind, whether in the Solomon...

Cockpit USA
Z2108
€438.02
This pilot's jacket is made with real goatskin like the authentic aviator's jackets of the U.S. Navy. Its synthetic mouton leather collar, can be worn with the classic style or high as it has loops and buttons for dual use.The jacket has a regular fit, with a metal central zipper. It has two front pockets with flap and button. The waist and cuffs of this...

Cockpit USA
Z2107H
€537.19
This Cockpit USA WWII (World War II) jacket is the current tribute to the one used at that time, made with the same official specifications and with a worn patina that accentuates its original appearance. Distinctive of a glorious era of aviation, of the deserved prestige of the aviators and a symbol of distinction, current and future.Since this item is...

Cockpit USA
Z21J003
€545.45
Aviator jacket Cockpit,USA in A-2 leather, iconic garment that equipped the pilots and air crew of the US Army Air Force during World War II. This special edition was designed in the 1980s in memory of the African-American airmen who studied at the Tuskegee Institute in Alabama and distinguished themselves in World War II with the nickname of the Tuskegee...